NB: This is the continuation of a series, in case you’re just joining, please take out time to read all the earlier pieces on “The Ikirun Chronicles” to make sense of today’s piece. Enjoy. 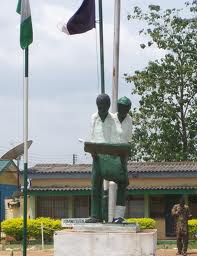 Finally, Monday was here and there was joy in our hearts, we were eager to experience the main reason why we left our families and travelled miles to a place we didn’t know existed until some few days ago – classes. We were really excited about starting classes, we wanted to have a feel of new subjects of Junior Secondary School and especially those with long names – Integrated Science and Introductory Technology.

Many of us woke up pretty early so we could beat the rush at the stream and also because we wanted to have our bath outside, in front of the hostel. It wasn’t like we didn’t have a bathroom, but really, did we have any? There was a passage between the room that housed us (yellow and blue house boys) and that of the green and red house boys and that was what served as our bathroom. You would recall that I said each room had about fifty occupants apiece, that means the passage was bathroom to about a hundred boys, whew! We had to look for options, but there was a little problem with our option.

Our hostel was located along a major pathway used by the whole school community. Our hostel stood on the way to the dining hall, it was behind the admin(istration) block, beside the lab(oratory) and adjacent to the staff room. Did you see that? We were strategically located and that set-up meant you had to be fast about bathing in the open. You see, junior girls swept the dining hall daily and it was those ones we dodged the most. And we heard stories that some girls actually chose to come very early so they could see our ‘thing’ and you really wouldn’t want your ‘thing’ to be the subject of discussion among the girls in your class.

Having had our bath that early, we dressed up in our second piece of house wear and went back to the hostel, waiting for the day to break. We didn’t have school uniforms yet. Tailors contracted by the school would later come to take our measurement and sew our ‘white and green,’ that’s what we called our school uniform. At daybreak, we found our way to the dining hall and realised that it wasn’t just us, the JSS 1 students, that didn’t have school uniforms yet, some of the SS 1 students didn’t too, and that was because the uniform for the senior classes was different from that of the junior classes.

Boys in junior classes wore white short sleeves on green trousers while those in senior classes wore white long sleeves on green trousers. Junior girls on the other hand wore green pinafores over their white shirts and their seniors wore white shirts over green skirts. However, there was nothing to differentiate students in junior classes from those in senior classes when on house wear. While all the boys wore short sleeves checkered shirts over brown trousers as house wears, all the girls wore checkered gowns as house wears. But some senior boys still went ahead to sew long sleeve house wears to show off. Still on our differentiation by uniform. While the boys didn’t refer to themselves by their wears, the girls did, they called their juniors pinafore. So, you would hear things like – “one pinafore there” and the junior girl would respond, “yes skirt.” Girls sha.

Our dress code was later changed in year 2000. Junior boys were then required to wear shorts both as house wear and school uniform, while the seniors wore trousers but the use of long sleeve shirt was eradicated. The change took place as my set was moving to senior class. So it was a mixed feeling, it was painful as it meant that I never wore long sleeve shirt in Ikirun and that was an experience every junior looked forward to. The good side was that, I never wore shorts, the last set to wear trousers all through Ikirun. It should be pointed out that the change was as a result of senior boys who were in the habit of folding their sleeves, the school authority reasoned that it was better to cut the sleeve rather than roll it up.

We waited in our room till we heard the siren. We were summoned for everything with the siren. Our siren was not like the siren blared by the police on the road, ours was like an alarm that went – weeeuunn, weeeuunn, weeeuunn. The siren sounded far to almost all the nooks and crannies of the school, because you could hear at the stream. We all had an idea of what was next in the agenda for the day, the siren said the exact time. After the siren, we still had the bell that would be rung by a student around the dormitories and class rooms, just in case you missed the siren. After hearing the siren, we went for our plates and the cacophony began. It was like a rite, once it was time for food, there must be noise, the clanging of spoon on stainless steel plates in hundred places. If we were not drumming with our plates, we were spinning them in the air. We were boys and we lived every bit of that role.

Usually, you were assigned a table in the dining hall, and we were fourteen per table. Fourteen people shared food in a bowl. As at this point, we had just one dining hall in Ikirun, an archaic building that looked like it was rescued from the stone age. You could immediately tell that it was not built for our generation, with cobwebs flying across the whole building and ceiling fans that showed rust of many decades and stopped working many years ago. The first time I saw the dining hall I was scared, it looked like a building from a nightmare or a horror movie.

The structures used for FGC Ikirun were originally used by a defunct Teachers training college and upon the creation of Osun state in 1991, the vacant premise were cited as a possible location for the state’s unity school. According to the rule, all states of the federation should have two unity schools – one unisex college and one girls’ only college. The unisex unity school for Osun state was located in Ikirun, while the girls’ only college was located in Ipetumodu. Both were established in 1995.

At this point, we the JSS 1 students didn’t have tables,  so we were served straight from the giant cooking pots, oh my. That’s was a harrowing experience. You queued for food just the way you do at NYSC camps. That Monday morning, we were served rice and stew. That was another sweet delicacy that I looked forward to in Ikirun and when they would decide to starve me, the school authority changed our Monday breakfast to bread and stew.