THE LAW OF SEED AND HARVEST 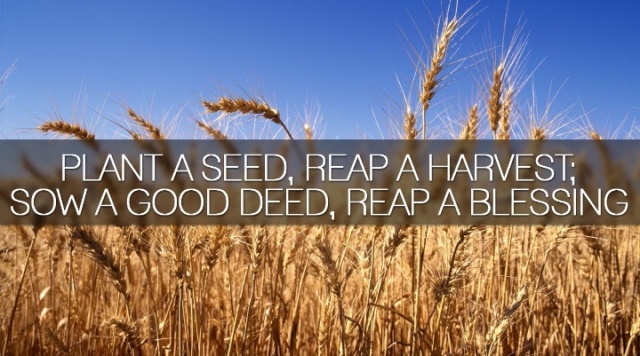 Some years ago, I took my younger siblings to their school and while I was waiting in the school lounge, my eyes caught a frame on the wall – it was Abraham Lincoln’s letter to his son’s teacher. That was my first time of seeing it, and somehow I knew within me that I wanted to write many letters, not to my son’s teacher though, but, to my son (kids, really).

Recently, it became clearer what form the letters would take, and what I wanted to achieve with them. I wanted to share my life experiences with my son (and the rest of humanity), I wanted to share life lessons, things I had learnt on the way, or that I was learning from. More recently, it became obvious that I should start writing the letters. But I didn’t start, until today. So, on this blog, I begin a new series which would appear under the category – Letter to my son.

While the earth remains, seedtime and harvest… shall not cease.  Genesis 8:22

Son, our world is governed by principles. These are universal laws not limited to a geographical space, race or creed. They are natural laws that cannot be broken. The law of gravity, for example is not a respecter of person or place. If I throw up a stone in my native Ikogosi, the stone would find its way back to the earth. If your mother decides to do the same thing in the place of her birth, Ibadan, the result will be the same. Even across the globe, in God’s own country, the United States of America, the stone will not hang in space.

There is nothing we can do for, or against these principles/laws. As Cecil B. deMille said, ‘It is impossible for us to break the law, we can only break ourselves against the law.’ Our lives, however, will be the better if we live guided by these principles. In recent times, I began to study principles, pay closer attention to them, and learn how to live by them.

Today, I want to write to you about the law I think I am most conscious of – the law of seed and harvest. I am not talking about it in just the microscopic way in which many see it – sowing money and reaping money in thousands fold. But rather in a broader sense, and a sense in which many are not even aware of it, that deeds, our actions, are also seeds.

As you would get to know of me, I greatly eschew evil and I can’t really say it is because of my faith. Even if I were to be one of no faith, I would still dread evil as much as I do now. I am constantly aware of the fact that if I sow evil, I will reap evil! I do not mean to say that I am perfect, to be candid, I am way too far from being perfect.

Simply put, the law says that you reap what you sow. Commenting on this law, a wise man said once you choose a cause of action, the power to change the effect had been taken off you. No amount of strategy or brainstorming sessions can alter the effect, except one re-visits the action. This, I believe, is why the Yorubas say esan o gb’ogun, roughly translated, that means effect cannot be altered. If you decide to plant yam, prayers or strategies can’t change your harvest to cocoa.

While many are aware of this law, as it relates to agriculture, and also to finances, a lot of people still forget to realise that it also applies to our actions in life. Our political space is replete with real life stories to show you this law in action. There was once a man who scuttled the presidential ambition of another, only for his own presidential ambition to be scuttled, much later, and in a more gruesome manner. There was also the young politician who ridiculed a much older statesman, only for him to suffer ridicule at the very peak of his career.

Like Loading...
This entry was posted in LETTER TO MY SON and tagged Abraham Lincoln, cause and effect, Cecil B. deMille, esan, Ibadan, Ikogosi, karma, Ralph Waldo Emerson, retribution, seed and harvest, Yoruba. Bookmark the permalink.

3 Responses to THE LAW OF SEED AND HARVEST